1Fourteen years into King Hezekiah’s reign over Judah, invaders attacked. Assyrian King Sennacherib[1] led the invasion force.[2] His army captured all the nation’s cities that had been protected behind stone walls, with one exception: Jerusalem.

2While Assyrians were still attacking the city of Lachish,[3] Sennacherib sent a message to Hezekiah in Jerusalem. It arrived by military courier: a top Assyrian officer. He brought part of the army with him. He waited outside the city wall, by the aqueduct that carried water to Jerusalem’s upper pool, on the road to the Laundry.[4]

3Three of Judah’s highest officials came out to receive the message: Eliakim son of Hilkiah, palace chief of staff; Shebna, palace secretary and scribe; and Joah son of Asaph, palace director of communications.[5]

Assyrian king: “God sent me to destroy this land”

4Assyria’s commanding officer told the men, “Tell Hezekiah this message comes from the Great King—the king of Assyria. ‘What made you think you could get away with this rebellion? 5Do you really think your words are a match for my war strategy and my army at your front gate? Who do you expect to rescue you?

6Do you think Egypt is coming?[6] Do you think you can count on that broken-down has been of a nation? If you’re depending on Pharaoh, king of Egypt, you’re going to lose that bet and you’re going to get your people hurt. 7And if you’re counting on your LORD God to help you, remember you tore down all his places of worship. You kept only one.[7]

8If you can come up with 2,000 men able to ride horses and fight us, I’d give you the horses. 9How could you possibly fight off our attack—even one led by our youngest officer? You don’t have any horses. You’re counting on Egypt to bring them, along with battle chariots. 10Do you think I came here without the LORD’s blessing? It was the LORD who told me come to this land and destroy it.’”

11Judah’s three representatives, Eliakim, Shebna, and Joah, told the officer, “Would you please speak to us in your language of Aramaic? We understand it. We don’t want our defenders on the wall to hear what we’re saying.”

12The officer said, “Well, is that so? Do you think my king wants me to deliver this message privately, to just you and your king? You don’t think he wants your defenders on the wall to know that before this siege is over, they’ll be so hungry and thirsty that they’ll be eating their crap and drinking their piss.[8] 13The officer started shouting in a loud voice, in the Hebrew language of Judah: “Listen to this message from the Great King—the king of Assyria.

”Ignore Hezekiah. Save yourselves.”

14Here’s what he wants all of you to know: ‘Don’t let Hezekiah convince you that you’re going to be okay, and that he’ll keep you safe. 15And don’t believe him when he says, “The LORD will certainly protect us. He won’t let this city of his fall into the hands of the Assyrian king.”

16Ignore Hezekiah. Make your own decisions. Come on out here peacefully. Then you can go back to eating the grapes and figs you grow and drinking water from your own springs and cisterns.[9] 17Later, I’ll come and peacefully lead you to a different land,[10] but one very much like your own. It’s a land of grain fields and vineyards for your bread and wine.

18Don’t fall for Hezekiah’s promise about the LORD saving you. Think about this: Has any god in any country or kingdom been able to stop the king of Assyria? 19We never got to meet the gods of Hamath or Arpad. Where did the gods of Sepharvaim go when we showed up? Did Samaria’s gods save them?[11] 20Think about it, people. What god in any of these kingdoms saved them? So why do you think you’ll be the exception? Why would the LORD save Jerusalem when no god has saved anyone from the king of Assyria?”

21Hezekiah’s men said nothing. Hezekiah had ordered it. 22The three men returned to Jerusalem, ripped their clothes in dismay and grief, and then reported back to King Hezekiah. They were Eliakim son of Hilkiah, palace chief of staff; Shebna, palace secretary and scribe; and Joah son of Asaph, palace director of communications.

Sennacherib ruled the Assyrian Empire from the time his father, King Sargon II, died in 705 BC until two of his sons murdered him in 681 BC. He kept records of his campaigns against Judah and Israel, and some of them survive, confirming key elements of history in the Old Testament report. He confirms, for example, that he didn’t manage to get inside Jerusalem this time. He reports, instead, that he trapped King Hezekiah behind Jerusalem’s walls “like a bird in a cage.”

The content of Isaiah 36 and 37 is pulled from sections of 2 Kings, according to some scholars. Compare Isaiah 36:1 to 2 Kings 18:13. And compare verses 36:2-22 to 2 Kings 18:17-37. Hezekiah’s story in Isaiah 37-38 seems to come from 2 Kings 19-20. Some scholars say it’s the other way around: Isaiah wrote it, and the writer or editors of 2 Kings copied it and added it to the historical record. Some who said Isaiah borrowed it explain that he probably did it with the idea that the Jews would listen to this retold story sometime after their exile abroad—perhaps in Babylon or maybe back in their homeland. There, they would listen to a tale about how great things used to be when King Hezekiah was disobeying God, before the hammer came down in the form of an Assyrian invasion force.

Lachish was about 30 miles (48 km) southwest of Jerusalem, a walk of about a day and a half. Assyrian chiseled pictures of their attack on Lachish and their impaling of the people there. It has been on display in the British Museum.

This was apparently a place by the water where people came to wash their clothes.

Scholars debate what the three titles meant. They’re often translated: “palace administrator,” “secretary,” and “recorder.” Some associate “secretary” with a scribe in charge of recording official documents. “Recorder” might refer to a legal official, such as a minister of justice. Some scholars, however, say they see a connection to a similar Egyptian title that refers to an official in charge of communicating and reporting to the king and then to the people on behalf of the king, a bit like a press secretary today.

Yes, Hezekiah apparently thought Egypt would come. And they did, during the following siege of Jerusalem. But Assyrians drove them off. Isaiah had argued against making an alliance with Egypt, saying God opposed it (Isaiah 30:2). Hezekiah did it anyhow.

The Assyrian king was mistaken. Hezekiah tore down hilltop shrines and other worship centers forbidden by Israelite law. Moses had told the people during the exodus out of Egypt that once they settled in their new homeland, they should worship at only “one worship center for the entire nation of Israel” (Deuteronomy 12:5) That place became the Jerusalem Temple that King Solomon built.

More literally, they’ll eat their own “filth” and drink the “water for their feet.” The question is how best to express those words today. Would the officer have spoken politely, using the more delicate words? Or would he have matched his words to the energy and the spirit he expresses in verses 14-20. If so, he may have used words that would get us in even more trouble than the common slang words used here. “Excrement,” often used, seems a little on the light side of “filth.” And what are you gonna do with “water for their feet”? “Urine?” That word doesn’t feel wet enough.

A cistern was a storage pit to collect rainwater or water hauled from a spring or a stream. It was often chiseled out of stone and lined with waterproof plaster.

Assyrians planned to dismantle the nation of Judah and deport the people, to make sure the nation didn’t reconstitute itself and live to rebel another day. Assyrians did that earlier to the northern Jewish nation of Israel, in 721 BC. Babylonians also deported people. Assyrians and Babylonians both took the captives to their own part of the world so they could keep an eye on them.

Samaria, capital of the northern Jewish kingdom of Israel, fell to Assyria two decades earlier, in about 722 BC. 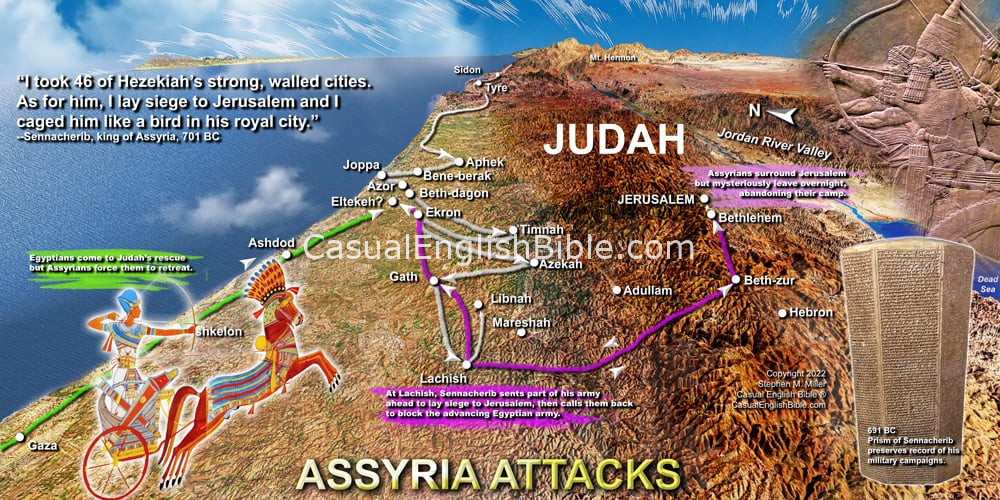